Too often I find myself complaining here. If it’s not one thing it’s another – the mechanics suck, the food isn’t spicy enough, the education is lousy, blah blah blah. And though some of my complaints may be valid (the mechanic one) I hardly think Chile is to blame for everything – I mean, I’m pretty sure they have cars break down in the U.S. too (but you couldn’t prove it by me). I guess the problem is that I’ve always thought of myself as a pretty open-minded person, fairly well-traveled, liberal, accepting, etc. but like I said, lately I’ve caught myself being super judge-y about all things Chilean. Even though my snarky remarks are almost always in my head (or said to an American friend) they are seriously counter-productive when I’m trying to live my life here. That being said, I’ve compiled a list of things I do like about living and working here.

Chileans, unlike Americans, do not eat a large dinner. Though I’ve seen them out in restaurants during dinner time they will be the first to tell you this is uncommon and that even the concept of ‘going out to eat’ is a new one here. There are a bunch of reasons behind this (ranging from the 17 year long dictatorship to the lack of a food culture,) but the simplest explanation is that like most former Spanish colonies, they have a large lunch at about 2 in the afternoon. When you stuff yourself full of things like rice and bread at 2, you’re not going to be eating much of a dinner. This brings us to ‘once.’ ‘Once’ is basically the Chilean version of British high tea. It’s a starch-laden nightly snack of sorts that always includes tea, Nescafe (not judging….), bread, avocado and a ham product. The history behind ‘once’ varies depending on who you ask but I’ve heard the following story on more than one occasion so I’m going with it. Apparently during the 19th century in the Salitre (Saltpeter) mines in the north of Chile, male workers used to drink a little Aguardiente (a seriously potent liquor) with their lunch or afternoon snack. As they wanted to hide the fact that they were drinking during their work day, instead of mentioning the alcohol itself they would refer to their afternoon treat as ‘once,’ which is the word for eleven in Spanish and the number of letters that aguardiente contains. I’ve also heard that ‘once’ comes from the influence the large British population had on Chile during the same time period. Either way, I like it. A couple of weeks ago I was in Santiago with some Chilean friends who made an exemplary ‘once’ for all of us.

And what’s ‘once’ without Hass avocado? Honestly, not much to be said about this one. A lot of those tasty avocados you get in the U.S. come straight from Chile but are even more delicious when fresh. I make such a mean guacamole now it’s not even funny.

After all my bread and avocado eating I am lucky to have access to some extremely cheap exercise. This leads me to ‘thing I like about Chile’ # 3 – yoga. Chile (and Valparaiso in particular) has some of the best and cheapest yoga I have even come across. The classes are fantastic and lead by experienced professionals who charge on average about 1,500 CLP per hour and a half session (that’s three US dollars. three). If you’re ever in the area, check out Yoga Sadhana, Valparaiso, Chile or email my favorite teacher Maritza at marbaja@gmail.com for private sessions in the 5th Region.

Last but not least and ultimately my favorite thing about Chile is this guy. He’s insane and has cost us a lot of stress and money (again, that’s a story for another time) but he’s the cutest lab-mutt ever and my favorite Chilean I’ve met. 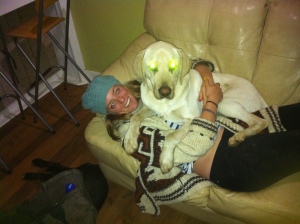 2 thoughts on “The Opposite of Complaining”